Smartphone use has grown enormously throughout the world, becoming an integral part of our daily lives. In addition to cellphone and messaging services, today smartphones enable their users to access and access any news that occurs, in real time, on the e-mail service of the GPS system. it all over the world as well as various games that can be played on these handsets. Smartphones incorporate powerful technology that allows for continuous interaction of online services, thus enabling their users to consume a wide range of content including what is not happening in their location or in the present. They are an ever-increasing source of physical, visual, auditory, and mental distractions that cause physical, neck, spine, eye drying and headaches as well as a range of mental issues such as fear, sadness, psychopathological symptoms, depression and anxiety. 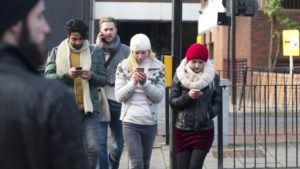 Impact on a global scale

Today, as we speak, in this context, some of the most important countries in the world – the United States of America, the United Kingdom, Korea, etc. – have taken concrete measures to prevent accidents and address the issue of road safety, accidents and distraction of drivers and pedestrians as a result of using mobile phones. In the US, studies show that using cell phones while driving has resulted in about 2,600 deaths and 330,000 serious injuries per year, thus increasing the fear of road deaths as a result of drivers’ use of cell phones while driving. and pedestrians. This tragic fatality has quadrupled the total number of traffic deaths. The UK Royal Society for Accident Prevention has recently strongly voiced its prohibition on the use of mobile phones as a very dangerous distraction by drivers and pedestrians. More and more teenagers and young people are being injured as a result of being distracted from crossing the street looking at their cell phones. In Korea, recent data show that accidents associated with smartphones between drivers and pedestrians have increased by 1.9 times in the last 4 years.

How is the situation in the European Union?

Over the last 30 years, mobiles, in general, and smartphones, in particular, have become a major source of communication and an essential device for many. A wide range of new mobile services and designs, and new users, have opened up a horizon of new opportunities for the communications business and beyond. Since the introduction of the first integrated in-car phones in the mid-1980s, the use of a single-handed phone in the car, and now, equipment that has no need to hold in hand, has grown tremendously. For example, a Dutch study estimates that approximately 600 road deaths and hospital admissions would have been prevented each year in the Netherlands if cellphone use while driving was prohibited. While in the Bavarian city of Augsburg, Germany, stations have integrated green and red lights on the ground and / or sidewalk to warn people who “stubbornly only watch their cell phones”. Meanwhile in the Dutch town of Bodegraven, in February, railroad lights have begun piloting a project to integrate red and green strips on sidewalks to alert ‘smartphone zombies’ as they cross the road.

Based on reports by the State Police in early summer 2019, mobile phone use is reported to be one of the leading and most worrying causes of road accidents. For the use of mobile phones while driving, police have prepared a draft on amendments to the Road Code that provide for the 10-fold increase of the current fine ranging from 5,000 ALL to 1,500 ALL. The flow of traffic and the carelessness of the drivers that have been driving have caused 412 road accidents to be registered in July alone. The highest number of accidents was recorded in the capital with 133, while there are no coastal areas which have only one road and narrow ones. If the average of 10 accidents a day is estimated, on average 15 such accidents are recorded at weekends.

How is it affecting and why are car accidents occurring due to cellphone use?

Extension of mobile use? Today, few countries in the world, in general, and in the EU, in particular, conduct systematic studies on the use of mobile phones by drivers.
Effect on driving? Drivers’ reactions are 30% lower when he / she uses a cellphone while driving